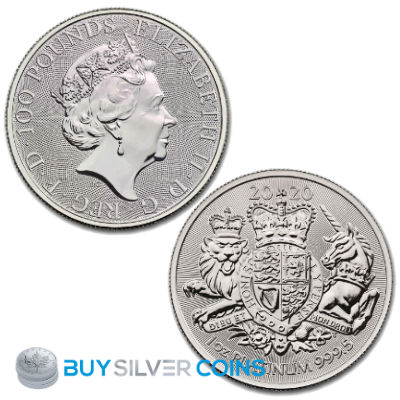 The front of the coin features an image of Queen Elizabeth II. The coin's face value is located on the front as well. Each platinum Royal Arms 1 oz coin has a face value of £100 GBP.

The reverse of each coin features an image of the Royal Arms, with the Lion of England and the Unicorn of Scotland to either side of the crest. The royal crown is located at the top. The coin's weight of 1 Oz, purity of 999.5 fineness, and year of minting, 2020, are all located around the outside of the coin.

The British Royal Arms series is a new series released by the Royal Mint, and is available in gold, silver and platinum. The platinum Royal Arms coin is an official platinum coin of the UK government.

These coins are available individually, or in tubes of 10 coins.

The Royal Mint also produce the gold Sovereign, the Britannia and the Queen's Beasts series, which is also available in gold, silver and platinum.